Spinach, Sweet Potato and Turkey.... in a Burger 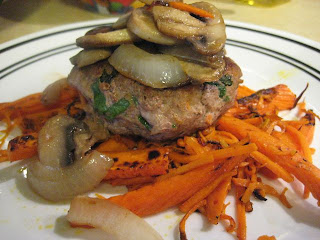 Yes, I have been away for a while since things have gotten a little hectic in my life.  Twas expected and I appreciate you, my faithful reader, for sticking with me as I continue on my journey.  Now in my absence, I have had a couple of "cheat" days.   On cheat day number one, I pigged out on meat jun, which by the way, happens to be one of my most favoritest Korean dishes.
I must say it was pretty yummy.  I didn't have any rice, bread or pasta, but there probably was flour in some of the other dishes (including the meat jun).  It wasn't too bad of a cheat as I didn't go for any all out gluten-filled delicacies.  However, I had another moment that same day when I sampled a Cookie Corner dark chocolate biscotti and candy-coated kettle korn popcorn. Those goodies were SO sweet! It was almost as if I was eating pure sugar!

Cheat day number two was at our school's annual fundraiser dinner with a banquet prepared by Soul Food's award winning chef.  Mmmmm.  I was looking forward to some southern dishes: cornbread, chili, bbq pork sliders (in a biscuit), and some buttermilk fried chicken.  Had a couple of glasses of red and found that I really liked the sliders and the chicken.  (Surprisingly, as much as I loved biscuits in the past, it really didn't do it for me as much anymore.)

Tonight I prepared burgers.  For some reason I was jonesing for some burgers and decided to throw some things together in a bowl in preparation for it.  So here goes: 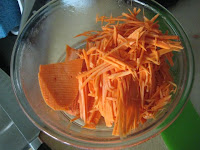 I shredded some sweet potato (yam) in my snazzy new mandolin and set it aside.

Then I diced some onions and I saved a few longer cut ones to saute later with some mushrooms.

Then diced up some roasted red peppers and chopped some spinach. Mixed the ground turkey in and added some spices. 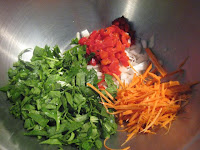 Here are the actual measurements: Mix the above and form into patties.  Heat up the pan to med-high heat. Add a Tbsp of coconut oil, or grass-fed butter.  Cook for about 7 min on one side, 5 on the other - depending on thickness.

While that's cooking, saute some sliced mushrooms and onions - or any other garnish for that matter.  Get the left over shredded sweet potatoes and cook them in some coconut oil or grass-fed butter over medium heat.  It makes sweet potato hash, which will be my base. :) 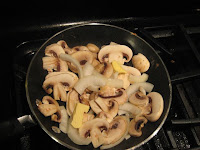 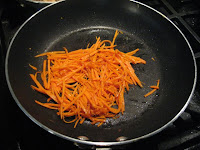 The resulting burger was crispy on the outside, juicy on the inside!

It won the kids' seal of approval. Of course, they needed some ketchup, though...... 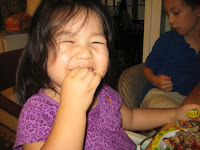 Posted by Jenn Tanaka at 9:52 PM
Email ThisBlogThis!Share to TwitterShare to FacebookShare to Pinterest