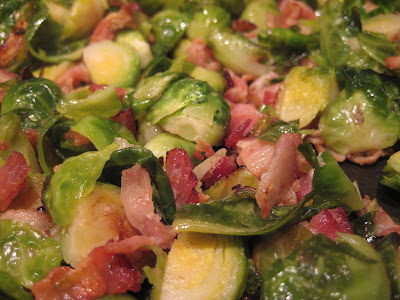 This St. Patrick's Day, I really wanted to celebrate the night with some corned beef and cabbage. However, I thought it would also be a great opportunity to try out an italian sausage and cabbage recipe from Everyday Paleo.  So after a trip down to WholeFoods to get some local cabbage and red onions, I went home to defrost some sausages from Costco.  As usual, I didn't follow this recipe to the t. And I realized I was hungry while waiting for the sausages to defrost!
So, after finding a bag of brussels sprouts in the fridge, I grabbed a pack of bacon to cook up with it. 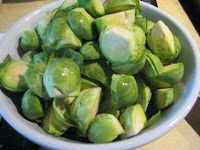 Slicing up 8-10 slices of bacon, I threw it in the pan to brown while washed, cut the ends off of and quartering the brussels sprouts.  As soon as the bacon was brown and crispy, I threw in the brussels sprouts.  Add some pepper and maybe another spice if you prefer, like dill. Toss. After about 5 minutes, you could add a bit of chicken stock or not, but cook the sprouts until they are soft and a beautiful shade of green. 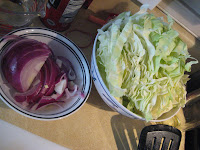 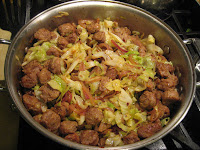 Now my sausages are defrosted enough to slice.  I wanted leftovers so I made a double recipe.  Browned the sausages in the (very large) pan.  Removed the sausages.  Added butter and red onion.  Cooked until softened (about 5 min) then added the cabbage.  Cook until the cabbage is soft and add the sausage back to the pan.  Add some pepper and paprika (1/2 tsp each). Toss well and serve!

After plating the dishes for my kids, I couldn't help but laugh as I had just made two dishes based on pork and cabbage!!  So take your pick or enjoy them both at the same time like we did.  We actually enjoyed it so much that we didn't really have a lot of leftovers despite doubling the recipe! 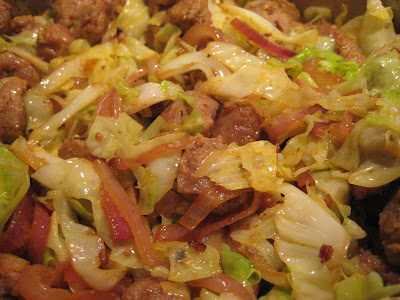 Posted by Jenn Tanaka at 11:40 PM
Email ThisBlogThis!Share to TwitterShare to FacebookShare to Pinterest